Book Review: The Time it Takes to Blink by David Six 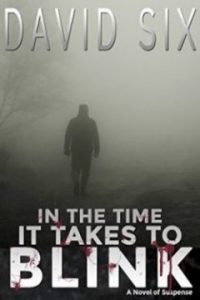 The Time it Takes to Blink is a fast paced- suspense/thriller with engaging, relatable, and memorable characters. The plot is well-timed, and compelling with a surprise ending that you won’t see coming.

The main character, Frank Bruno, is one you’ll want to cheer for. Slowly his story unravels, and any reader would be hard-pressed not to cheer him on. David Six does a masterful job of doling out the details of Frank’s backs story, reeling you in with his fishing, Schlitz, and Anchor Steam beer.

The horror is a mix of Hannibal-like crazy (without the cannibalism but with all the weird who-thinks-of-this-ugly-human-horror stuff) and the BTK-like killer (Dennis Rader who bound, tortured and killed ten people between 1974–1992). It can get gruesome, but Six never crossed the salacious line.

In one memorable scene you learn a bit about the perp’s personal habits that, although totally weird and creepy, gives you a solid understanding of how ‘off’ this guy really is—and the most horrific part—he appears normal to the rest of the world.

Any room for improvement? For characters and plot, Six gets five stars. Pacing and voice––five stars. The only area where it got a bit distracting is his use of similes and metaphors. Usually, an excellent trait for a writer, but Six could dial-down the frequency, in my opinion. That said, his ability to conjure up an image with unique and crystal clear images was superior to most.

I highly recommend David Six’s The Time it Takes to Blink: A Novel of Suspense & Horror, and I’m looking forward to the next adventure of Frank Bruno. Did I forget to mention the unexpected twist at the end?  You won’t feel cheated; all the clues are there, but yet, it will stupefy you.

Other Books by David Six